Engineers and tradesmen in Augsburg learned to tame the unruly power of the water and to use it to their advantage. In so doing they laid the foundation for the economic advancement of the city. 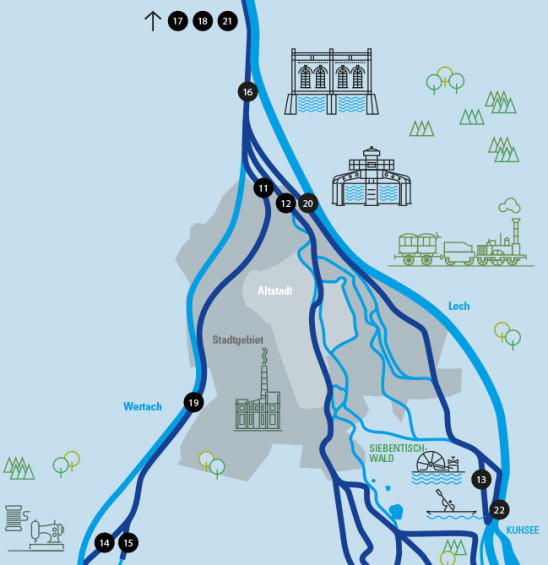 Fuel for Augsburg's handcraft and industry 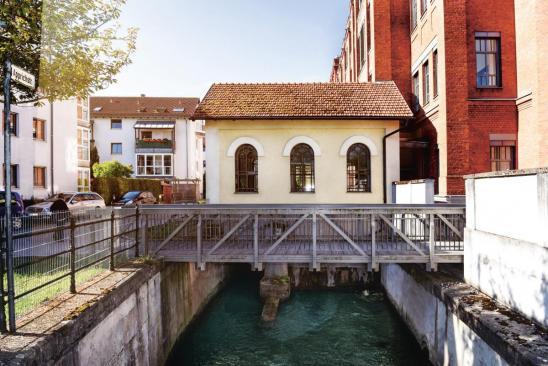 In the 14th century handcrafts and commerce grew and thrived in Augsburg. Because water wheels drove the mills, hammer and pumping stations, the city grew to an early center for textile and paper production. In the 19th century Augsburg’s abundance of water became an important locational factor for Industries. Starting in 1840 turbines provided more than ever before for the majority of the necessary energy. The result was the rapid expansion of textile and paper production as well as machinery and turbine production.

A time of departure

During the time of industrialization, the Augsburg textile industry grew rapidly, just like the twisting and sewing thread factory Göggingen, which is shown in this etching. 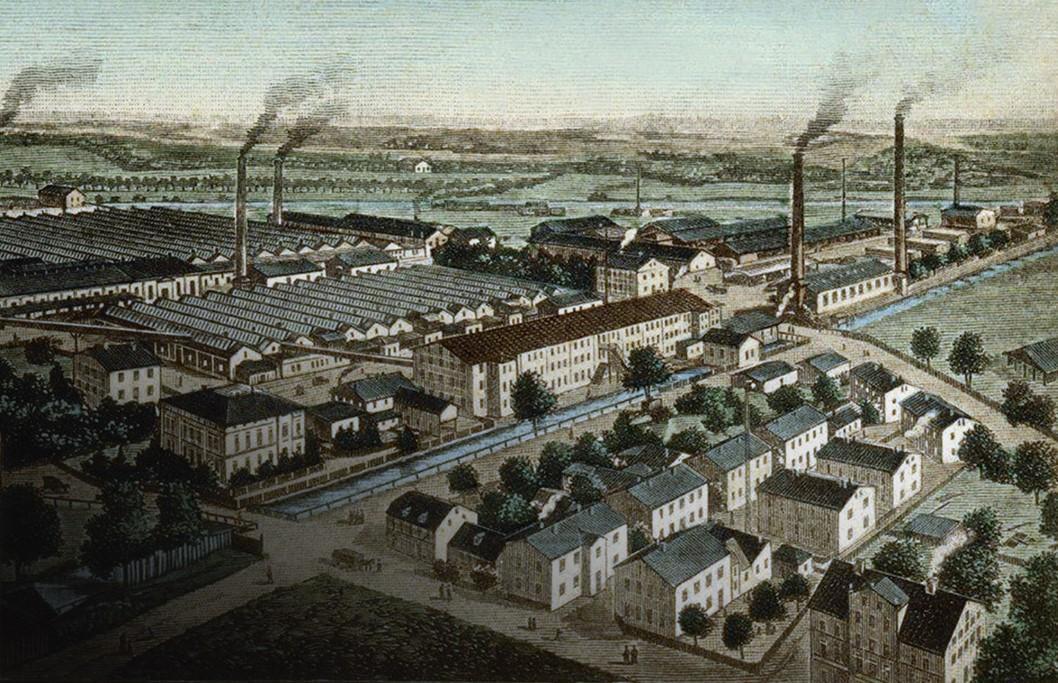 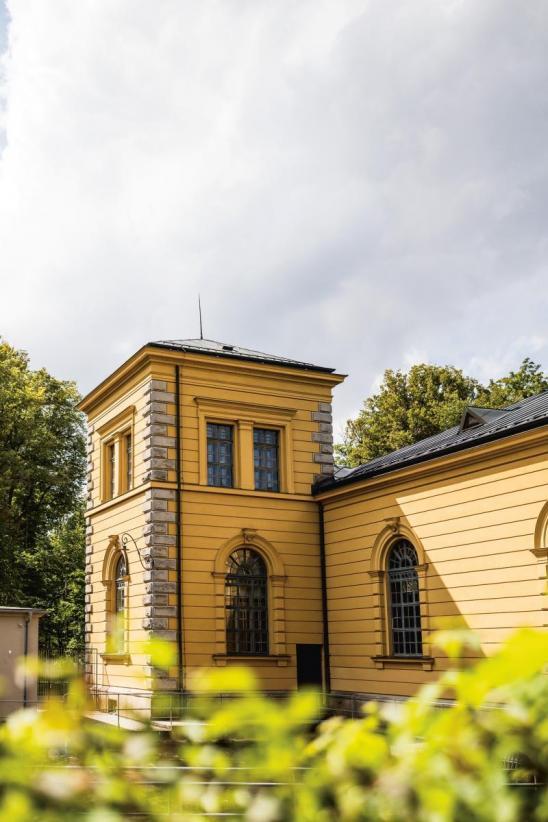 The Waterworks at Hochablass form the basis to provide a modern, clean and central drinking water supply for Augsburg’s urban area.

This factory is an internationally admired monument to industrial culture. The technical equipment originates from the Machinery Factory Augsburg (MAN).

The Waterworks at Hochablass are not only fascinating due to their groundbreaking technology in the interior. Also the palatial exterior created by the architect Karl Gollwitzer, hints to the epic importance of this structure. The way in which form and function are combined here is especially impressive. 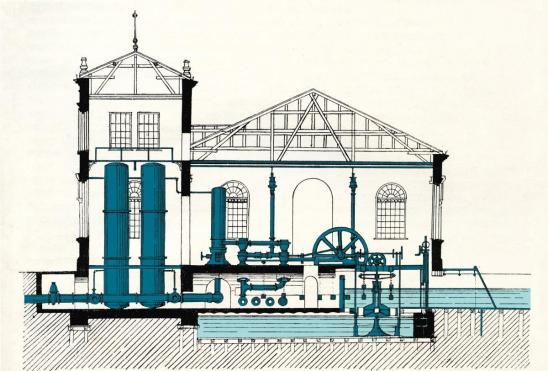 Interior of the Waterworks
The dawn of modern water supply

The Waterworks at Hochablass were put into operation in 1879. It delivered pure, untreated and hygienically impeccable drinking water for the citizens of Augsburg and is considered to be the birthplace for modern water supply in the city. Ground water was drawn out of the springs using two double piston pumps, then directed into cast iron basins under the machinery building and from there it was fed into the drinking water pipeline network. Today the building is a water power plant and a technical museum well worth seeing.

The Industrial Revolution in the 19th century caused the demand for energy to increase steadily. This was remedied by the creation of the first large water power plants. 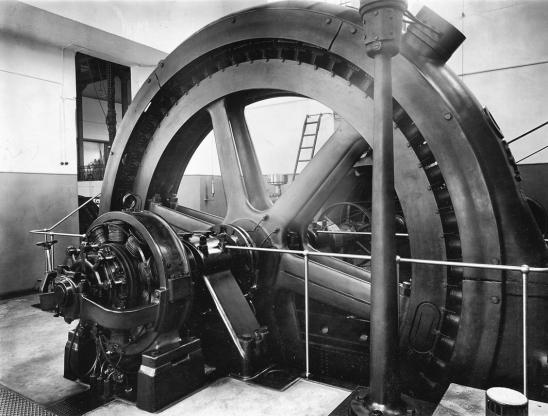 At the convergence of Lech and Wertach, the turbines in the power plant at Wolfzahnau have suppled electricity since 1901. The hydroelectric power plant is still in operation today and it is located in the nature preserve Wolfzahnau. An interesting detail: 36 cubic meters of water a second flows through the discharge canal.

From the World's Fair in Paris to the Wolfzahnau

The power plant at Wolfzahnau was the first in the Augsburg area which went into operation completely spatially independent from an industrial area. The flywheel generator which was built into the plant was celebrated at the World’s Fair in Paris 1990 as a show piece for German state of the art engineering. After the exhibition in Paris, it was acquired by the cotton spinning factory at the Stadtbach. 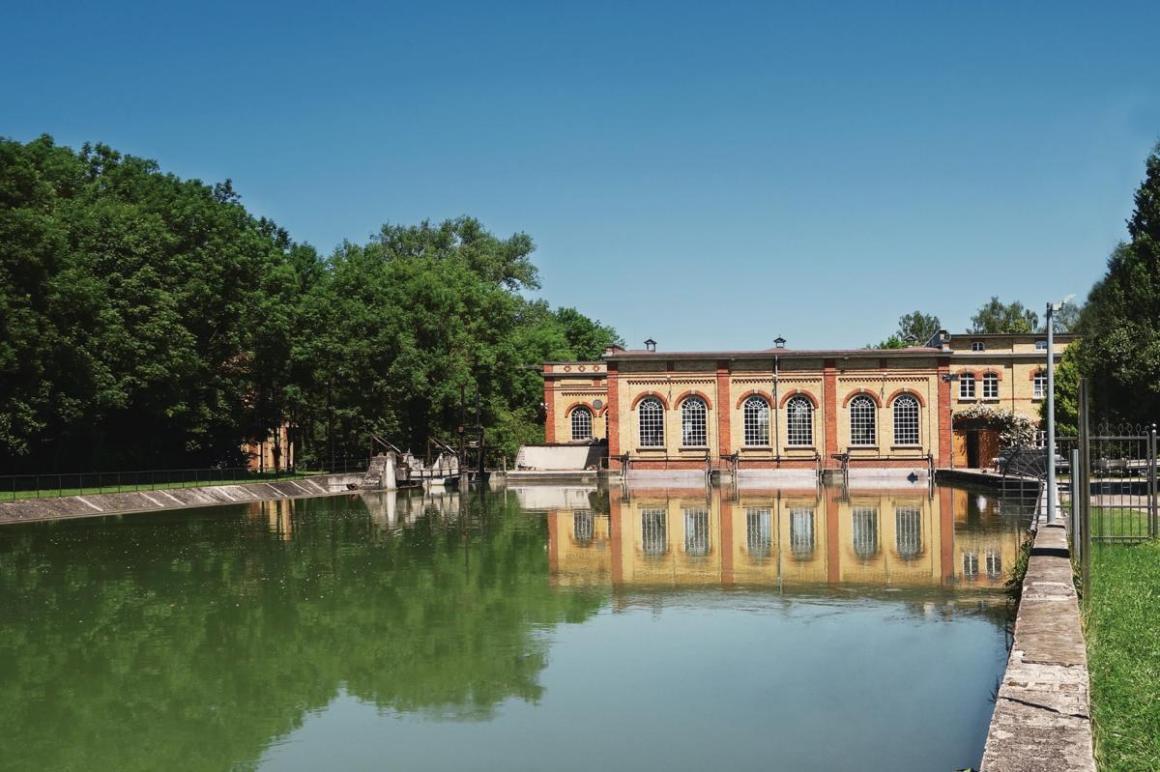 Power plant on the Wolfzahnau 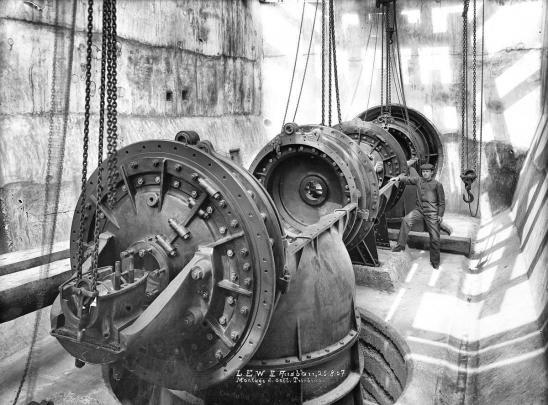 Built in 1901, the power plant in Gersthofen was the first large power plant on the Lech and it rang in the era of comprehensive coverage of electrical supply in Bavarian Swabia. First it primarily provided power for Hoechst company factory. This, in turn, attracted other large companies like the Lech Steel Works to the northern district. Many of them are still there today. 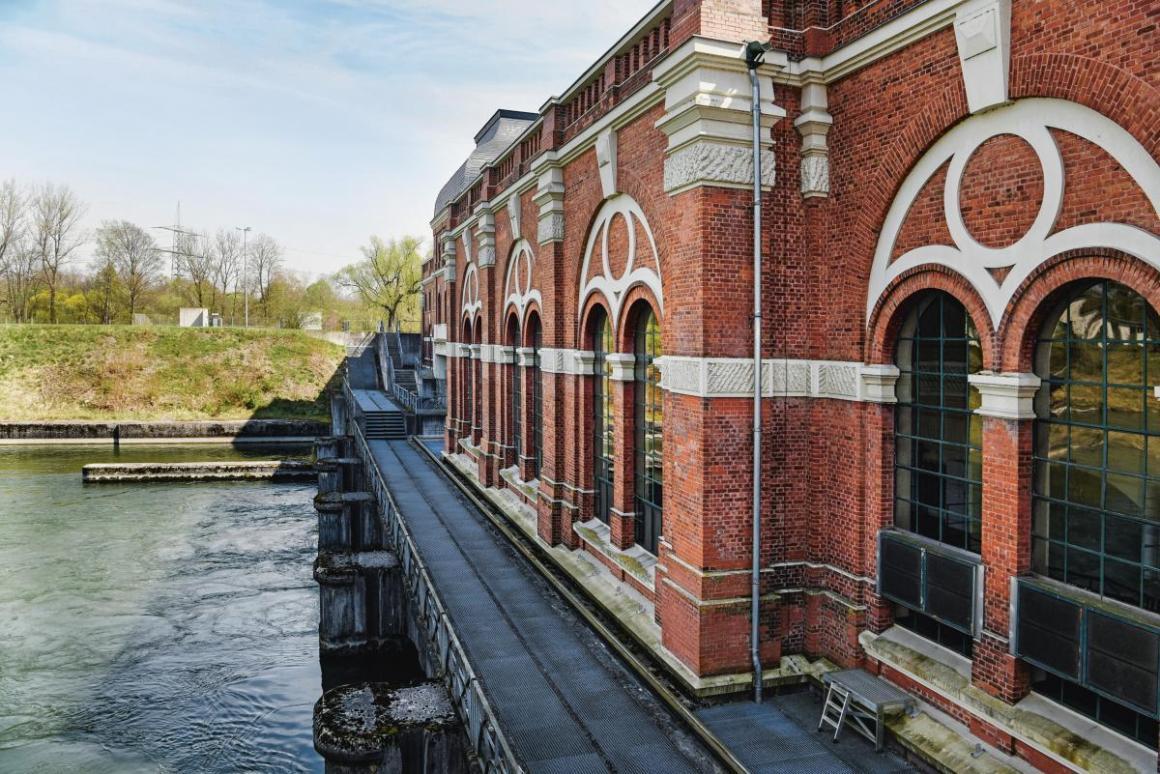 In 1972 the Olympic flame from the Munich summer games was ignited in Augsburg. 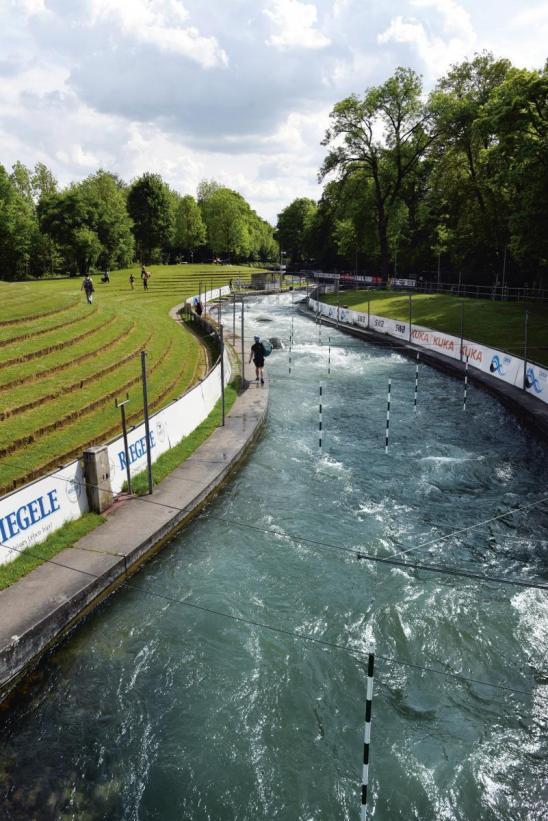 At the Olympic canoe competition in 1972 all of Augsburg’s fans were on their feet to witness this unique spectacle.

The first artificial whitwater course in the world

At the specially built facility for the very first Olympic canoe competition, athletes from all over the world fought to win the coveted gold medal. In 1970 the first artificially created whitewater course in the world emerged out of the Eiskanal (Ice Canal), which was originally designed to keep free floating ice from entering the city. European and world championships still take place here on a regular basis. 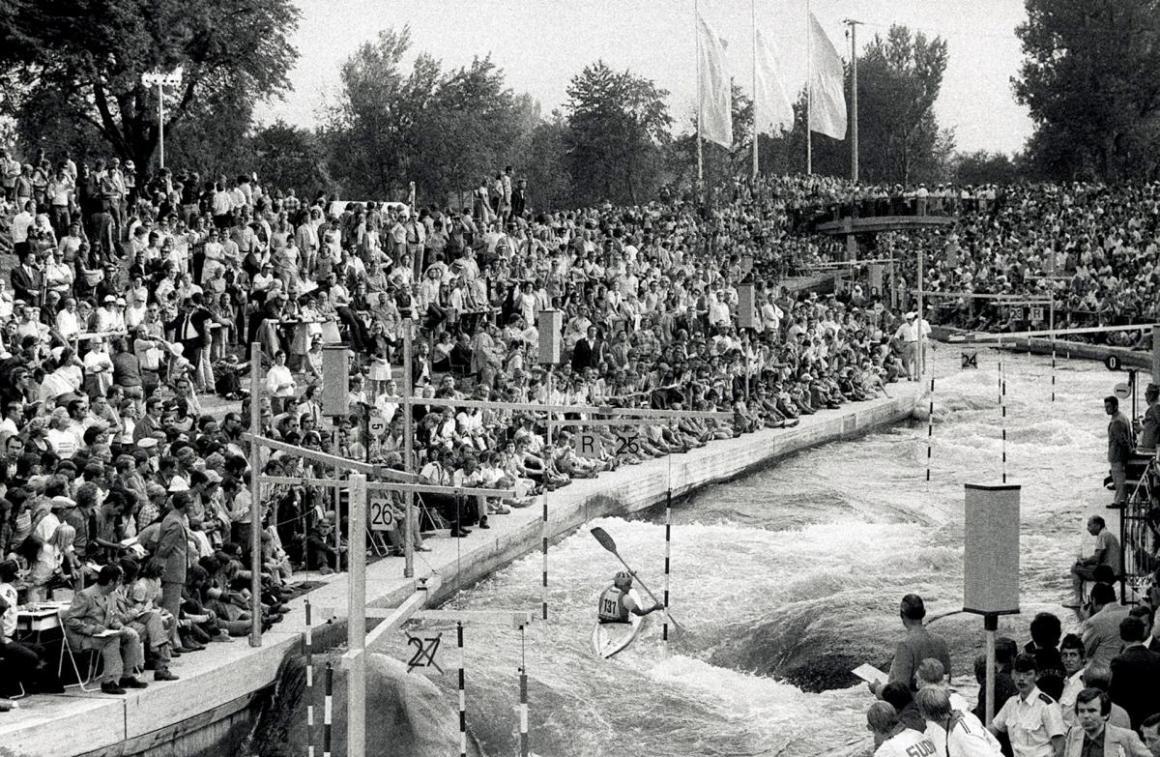 The German national training center for canoe slalom and white water is located directly at the Olympic course. Many German medalists have prepared for their success here. 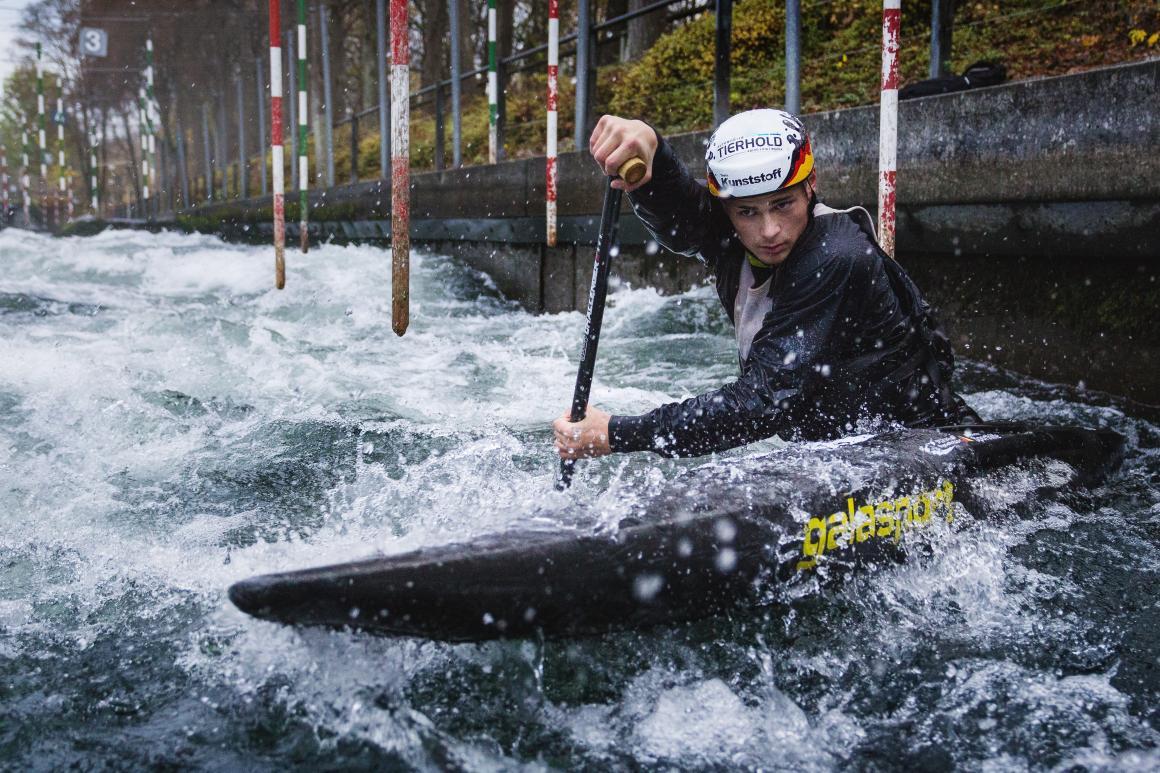