Drinking water for everyone

Providing the public with clean drinking water had an important effect on the development of the city. Water was pumped through the Waterworks and the fountains into the upper city. The city architect Elias Holl set new standards for hygiene when his Stadtmetzg (city butchers house) was built. 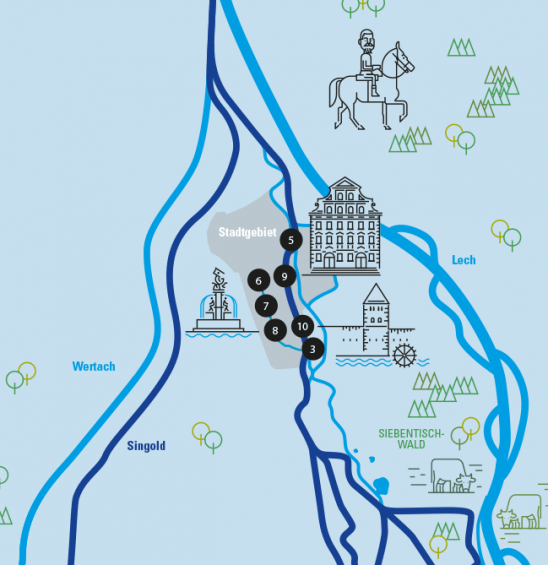 3. Waterworks at the Red Gate 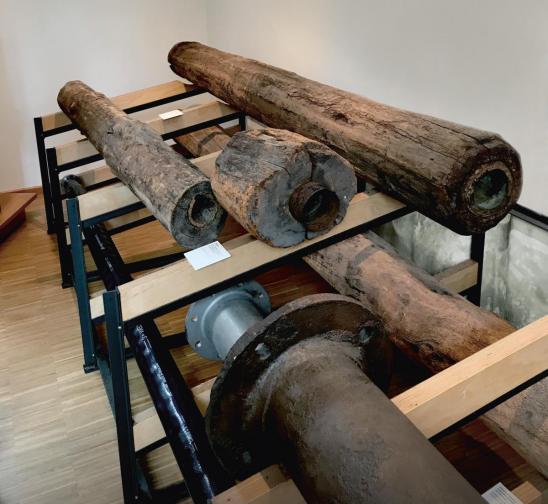 The water lines, so-called “Deicheln” were made primarily from wood. Only the connecting elements were metal casts.

Branching out in all directions, the complex system of the water pipelines brought fresh drinking water to the fountains of the upper city. The three monumental fountains on Maximilian Street were also part of this pipeline network. Especially the Mercury and Hercules fountains were of fundamental importance for the drinking water supply to the citizens of Augsburg. 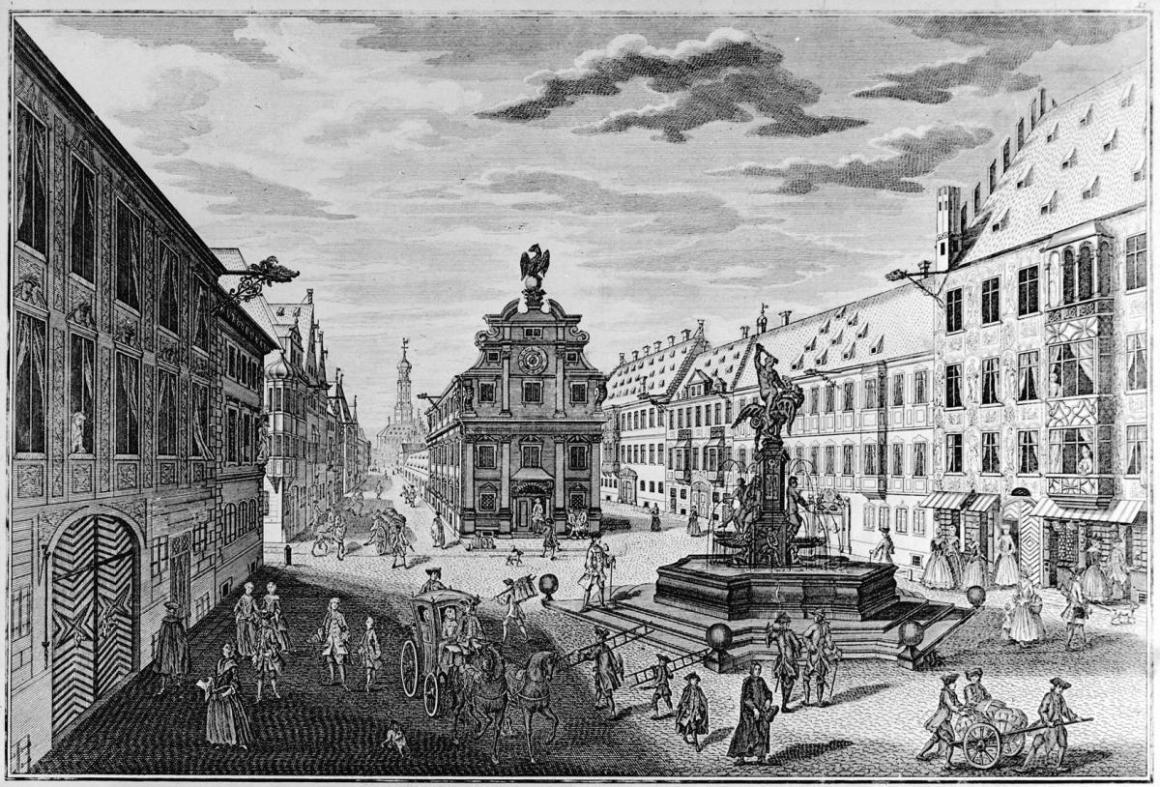 Hercules fountain with a view of St. Ulrich and Afra around 1770
Pioneers of water technology

Beginning in the 15th century Augsburg’s fountain masters had a spirit of invention which repeatedly fostered admiration all over Europe. The reason for this was the ingenious idea to use water power to transport water. 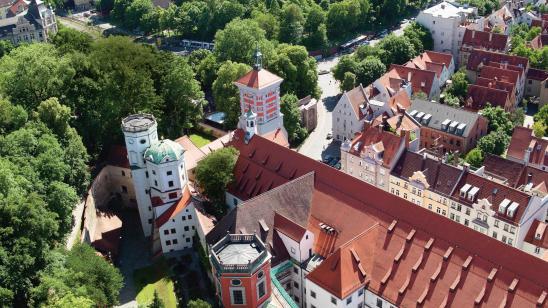 From here the necessary water was pumped to the upper city using piston pumps and the principle of “communicating pipes”.

The first two water towers are built at the Red Gate

One water tower especially for the monumental fountains

The need for fresh water grew further as the population of Augsburg increased. In addition, the monumental fountains of the renowned Flemish sculptures, Adriaen de Vries and Hubert Gerhard were erected. Since these were also used in part to provide drinking water for the populace, the Waterworks at the Red Gate reached its limits. Thus, an extra water tower, the “Kastenturm” (Box Tower) at the Red Gate, was built in 1599 especially to provide water for the monumental fountains. 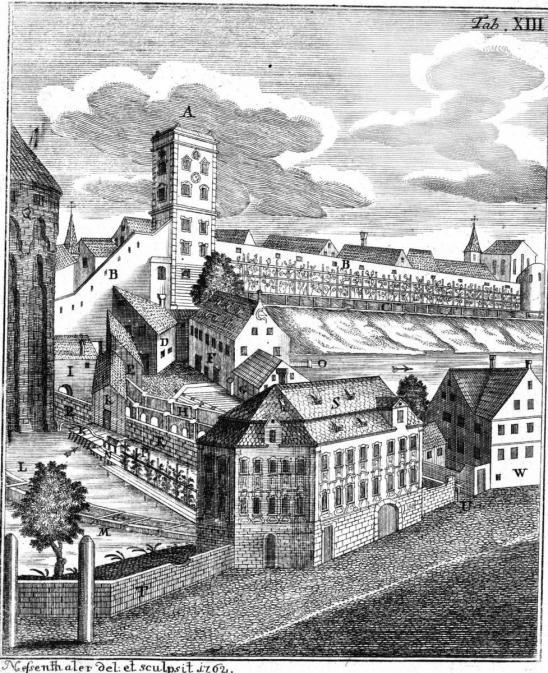 The Lower waterworks and the Waterworks at the Vogeltor (beginning in 1774) contributed decisively to the well-functioning provision of water in Augsburg.

The second largest waterworks in the city was built in the year 1500 near the cathedral. It provided the water for the Bishop's residence and for the entire cathedral quarter. 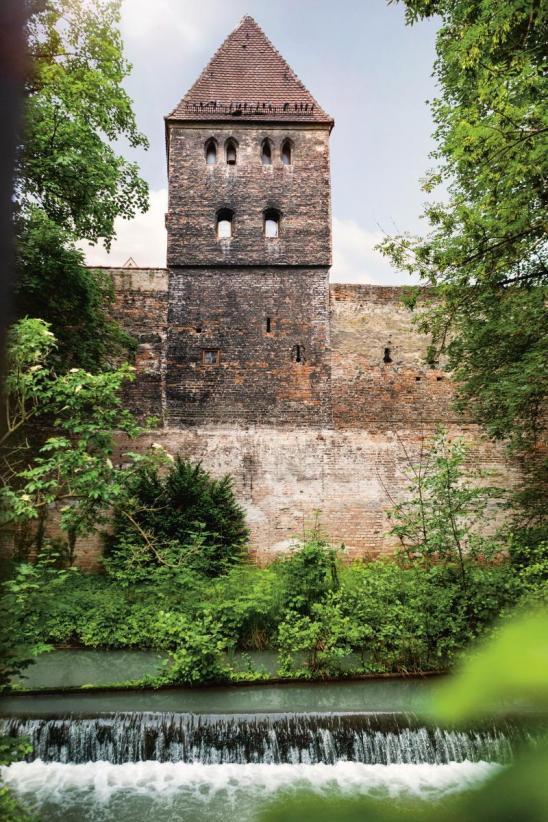 Water tower at the Vogeltor
Technical developments in time lapse

Waterworks were the places where great technical advances in the system of water supply took place over the centuries. This spanned from the Archimedean screws to the piston pumps and all the way up to modern turbines. 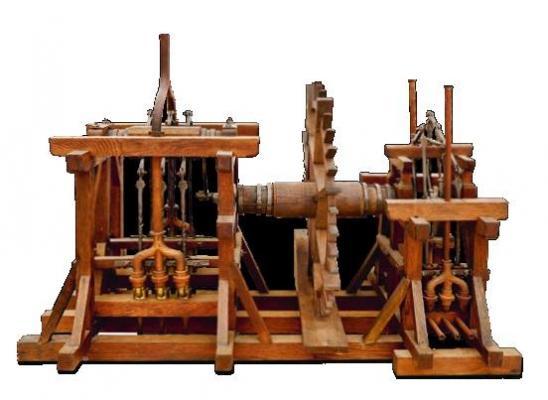 Many of the admired innovations developed by the most important fountain master Caspar Walter (1706-1769), were well known far beyond Augsburg’s borders. Some of the models of his groundbreaking inventions can still be viewed today in the one-of-a-kind model exhibition at the Maximilian museum.

The three monumental fountains show the most magnificent side of Augsburg’s water system. An ensemble of this kind can only be seen in Augsburg, so it is no wonder that they attract more international visitors every year.

It is the largest of the three fountains and lends the town hall square its southern flair. It was created in the style of mannerism between 1589 and 1594 by the sculptor Hubert Gerhard. 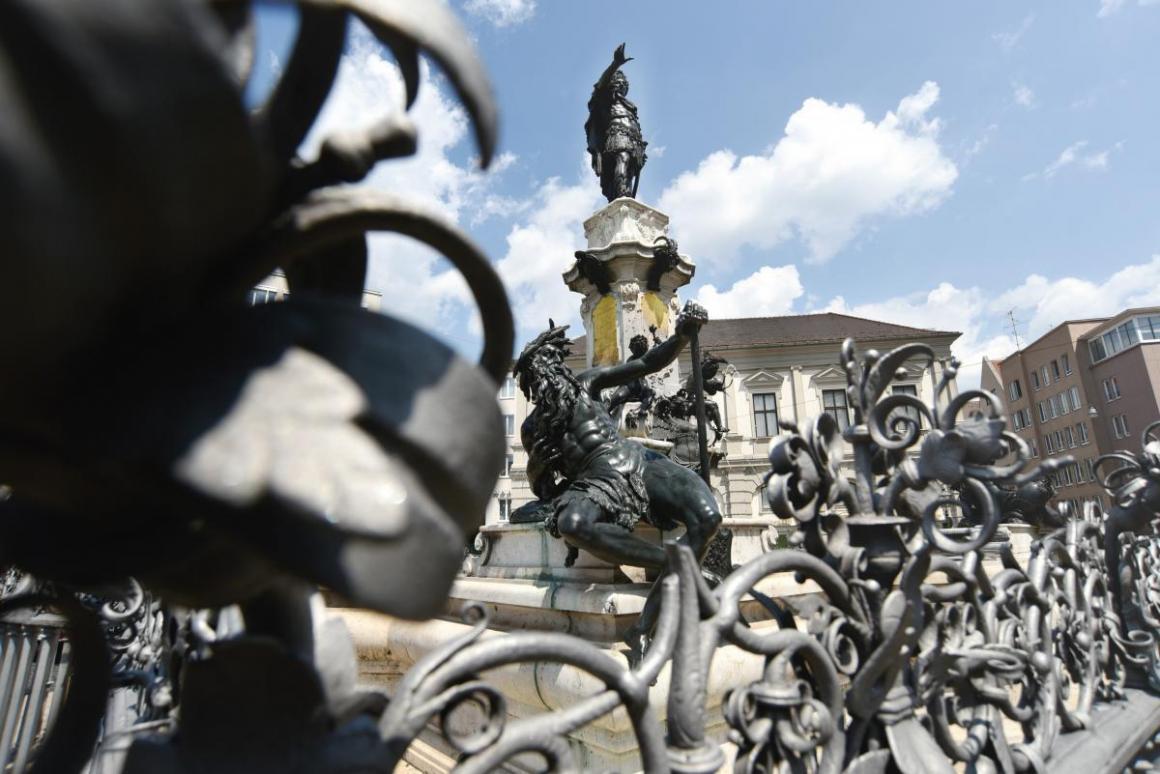 Both of these splendid fountains were made between 1596 and 1600 by the Flemish artist Adriaen de Vries. They are late Renaissance artworks of European renown. 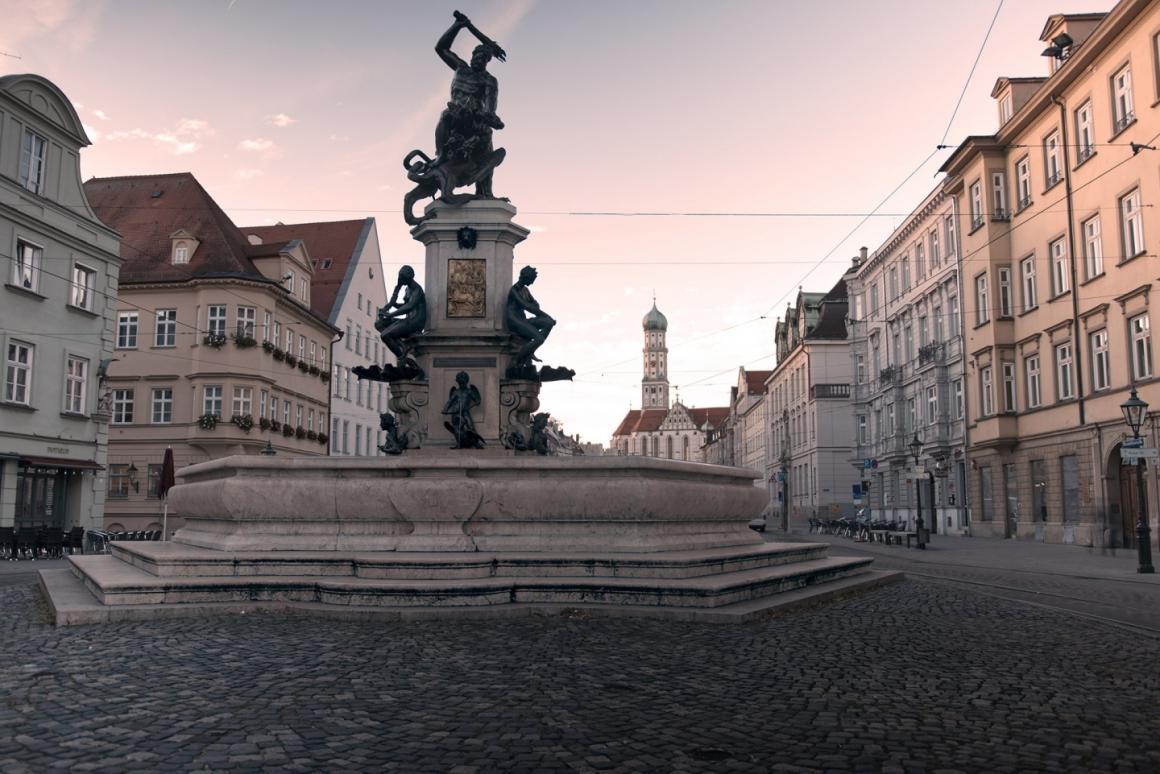 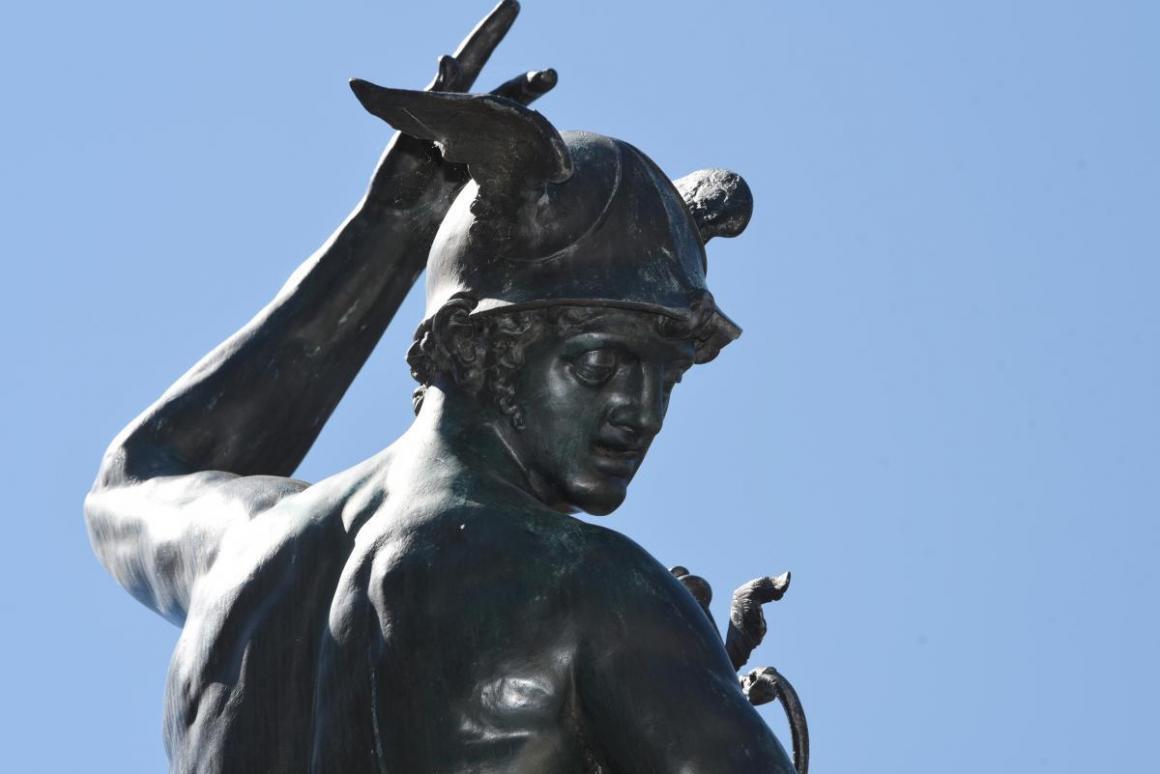 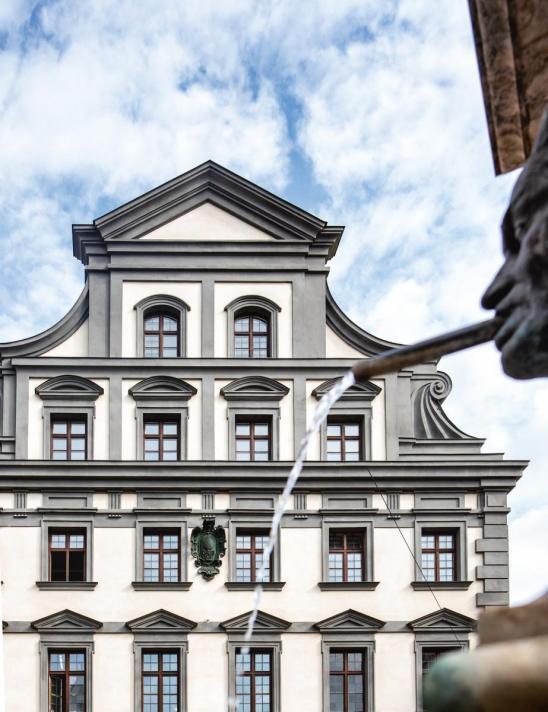 It is widely known as the most beautiful city butchers house in the world - the Stadtmetzg. It is a unique building that combines beauty with practicality.

Hardly anyone would suspect what was hiding behind this lovely Renaissance facade: the hall where the butchers in the city of Augsburg sold their meat! 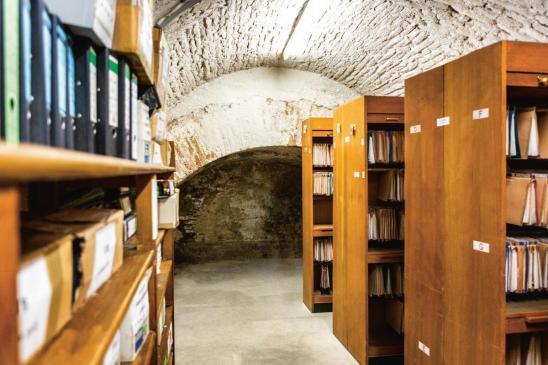 Augsburg’s city architect Elias Holl decorated the functional structure with a representative Renaissance facade. Between 1606 and 1609 the Stadtmetzg (city butchers house) was erected over the Lech canal. In his superb edifice Elias Holl succeeded in solving two common sanitation problems of meat processing places in that time. The flowing water served to cool the meat and keep it fresh. In addition, the fast moving waters in the Lech canal disposed of the waste quickly and efficiently.